HUACAYA STUD MALE ALPACAS At Spring Farm. We have always strived to include the best genetics in our alpaca breeding program by utilising the very best stud male alpacas – in both huacaya and suri – available to us.

To further enhance our breeding program, we have selected from amongst the worlds best genetics.

Gunsmith will need no introduction if you were at the BAS National 2018. He had one cria at the Show - Velvet Hall Storm Surge. Storm Surge won the grey championship and was the only junior in the line up for Supreme! At this years National (2019), Gunsmith's crias took Champion Grey Male and Reserve Champion Grey Female.

We bought Full Metal Jacket from Herts Alpacas in 2017 and he will be available for 2018 matings (now proven and we are expecting his first cria this year).

In 2017, alongside Full Metal Jacket, we also purchased an exciting black huacaya male from Herts Alpacas called Phoenix. At the 2018 South of England Show Phoenix took Reserve Champion Black male as an intermediate. He was shorn in June and we were stunned by the quality of his fleece - super fine and bright! To test this out, we entered his fleece (now as an adult) in the Heart of England 2018 fleece show. He took 1st place adult black Huacaya and then went on to take Reserve Champion Black Fleece! He worked for the first time in 2018 and we are seriously impressed by his first crias. If you are as interested as we are in his genetics – contact us for details.

Eringa Park The Commandante of Accoyo is a multiple Champion winning mid fawn male sired by Jolimont Commisario and joined us from Appledene Alpacas of Kent where he was their outstanding stud male for a number of years!

Shogun (mid fawn) joined us from Fowberry Alpacas bearing genetics from Fowberry Nobility and Top Account. He joined our stud team in 2014 and is now available for outside matings – contact us for details. 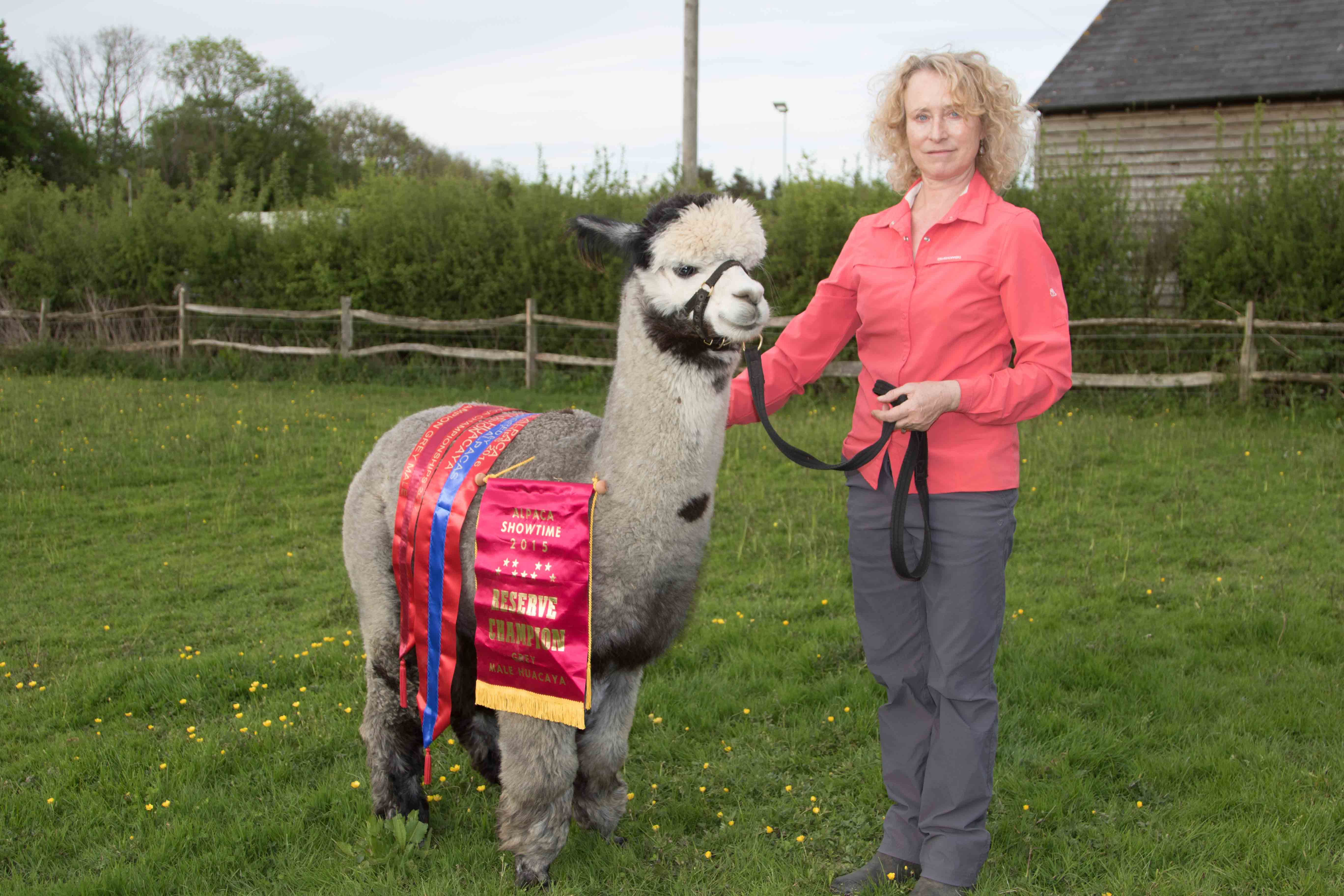 EPC Gunsmith, recently purchased by Spring Farm Alpacas was originally selected and imported as the first grey stud male ever owned by Beck Brow Alpacas. This followed his success at the Australian National Show 2014. Gunsmith is sired by the noted Wyterrica Propaganda who is in turn sired by the famous Blue Grass Waterloo Sunset. Gunsmith has a mid steel grey fleece which displays good density, character and style, and a very good degree of fineness and uniformity of micron. Gunsmith first progeny were born in 2016 and Beck Brow Alpacas and their co-owners Velvet Hall Alpacas were delighted with their quality.
Gunsmith’s first progeny entered the show ring in 2017:
Champion and Reserve Champion in both grey male and grey female categories were awarded to Gunsmith’s progeny at NWAG Alpaca Championships 2017.
Champion Grey Female and Reserve Champion Grey Male (Gunsmith was Champion) at SAG Alpaca Championships 2017
Gunsmith’s progeny in 2018:
Champion Grey Male (Velvet Hall Storm Surge) at the BAS NATIONAL 2018 and was the only junior in the line up for Supreme!
At the BAS National 2019, Gunsmith’s crias again were dominant in the grey classes. Talla took Reserve Champion Grey Female and Storm Surge took Champion Grey Male for the second year running!
At the NWAG 2019 the same two Gunsmith cria took Champion Grey Female and Champion Grey Male.
Storm Surge and Talla then went on to win Champion Grey male and female respectively at the Scottish and Northumberland Shows!

Our first Gunsmith cria were born in 2019 and we will be taking one (Spring Farm Wizaed) to the BAS National in March 2020!
We are expecting a number of Gunsmith’s cria in 2020 and needless to say can’t wait. If you are interested in grey genetics – contact us for details as early as possible. 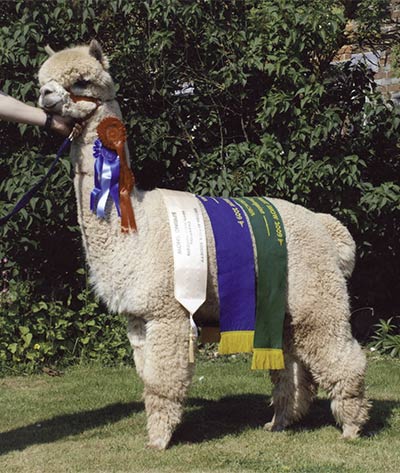 Commandante is a solid mid fawn stud male who exhibits superfine, uniform and soft handling fibre characteristics which he reliably passes on to his crias. His tremendously bright fleece is dense, consistent and well organised in its style of crimp right to his extremities. He is a beautiful true to type macho, has a great phenotype and solid bone structure, together with a very easy temperament to manage.

He is a recent and highly prized addition to our huacaya stud males, and it was the consistently repeated superior fibre characteristics in his progeny’s fleeces which made him a “must have”. His progeny exhibit consistently fine, extremely bright and dense fleeces on a good frame. Like all our stud males, he has an excellent jaw structure and bite. 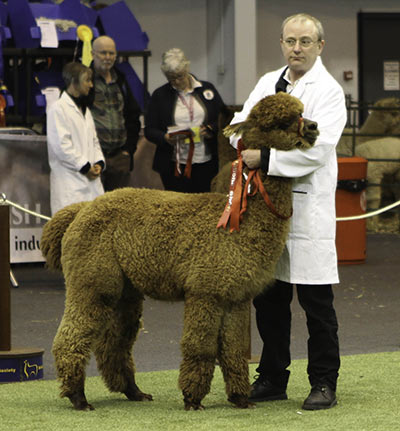 We are very pleased to have purchased Shogun from Fowberry Alpacas in North Yorkshire. Shogun is a solid light brown Nobility (solid dark fawn) son from a top performing Fowberry female line. His dam, Fowberry Nell (by WD Miguel) is medium grey and has already produced a stunning medium grey herd sire in Richebourg. Shogun’s sire is Fowberry Nobility, a Top Account son. Nobility is unbeaten in fawn male classes in the UK! Shogun is following in his father’s footsteps and was awarded Reserve Champion Brown male at the BAS National Show 2014 and Champion Brown male at the NWAG Championships 2014.

Shogun is perfectly conformed and looks every part the “macho” stud male. His fleece is uniform in character, micron and colour and is fine and soft handling. His first fleece (at 12 months) was 18.49 microns with an SD of 3.8, CV of 20.5 and a CF of 99.2%

Whilst easy to handle, he believes himself born to breed! 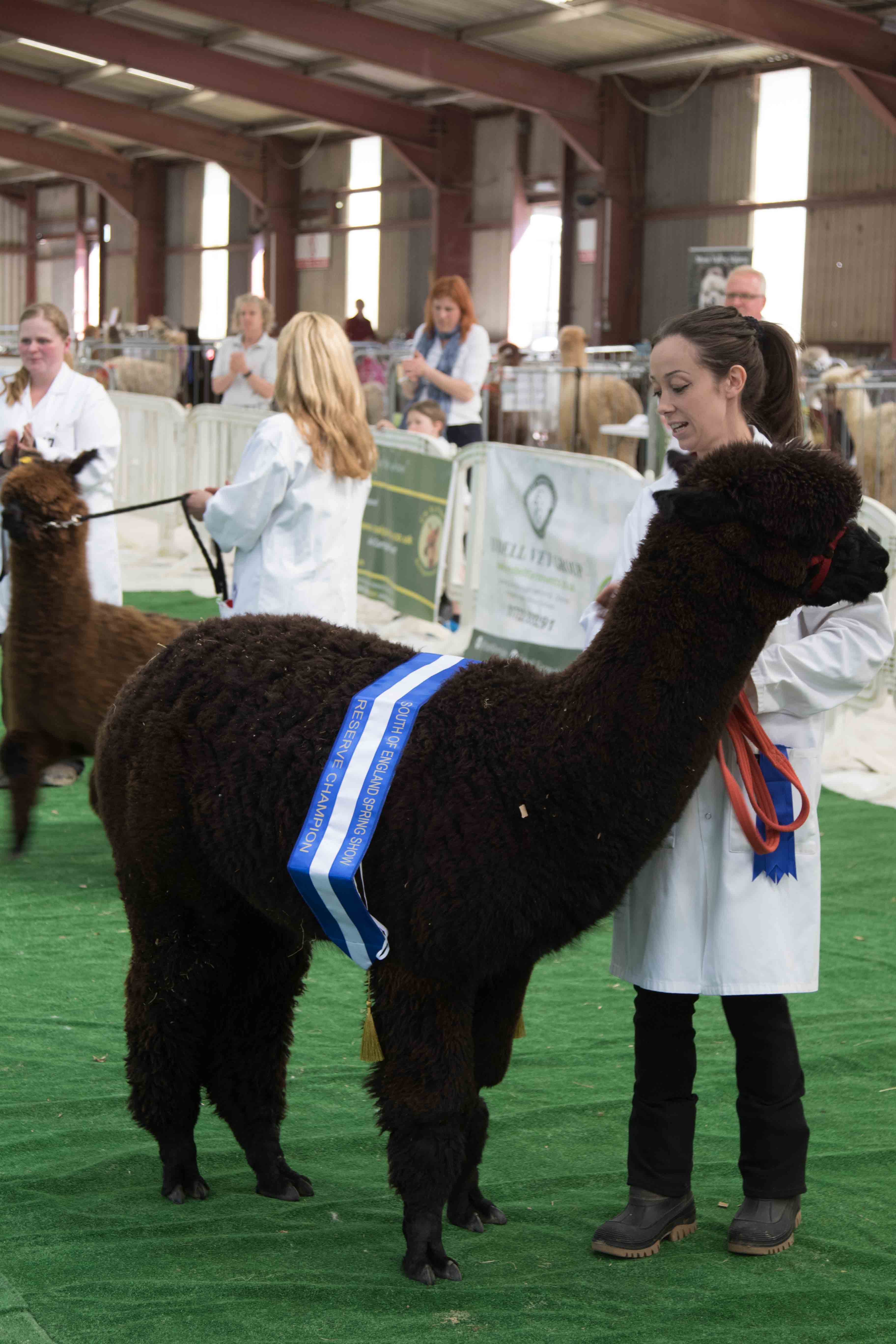 Phoenix is solid true black with immaculate conformation and bite, good fleece length and density with a fleece that displays good brightness and character from skin to tip. We took Phoenix to the South of England Show 2018 where he delighted us by taking Reserve Champion Black Huacaya. We sheared him in June 2018 and showed his (now adult) fleece at the Heart of England 2018 Fleece Show. He took 1st place adult black Huacaya and then went on to take Reserve Champion Black Huacaya Fleece!

Phoenix worked for the first time in 2018 - we are really excited for 2019 to see his first crias. if you are interested in using him, please get in touch. 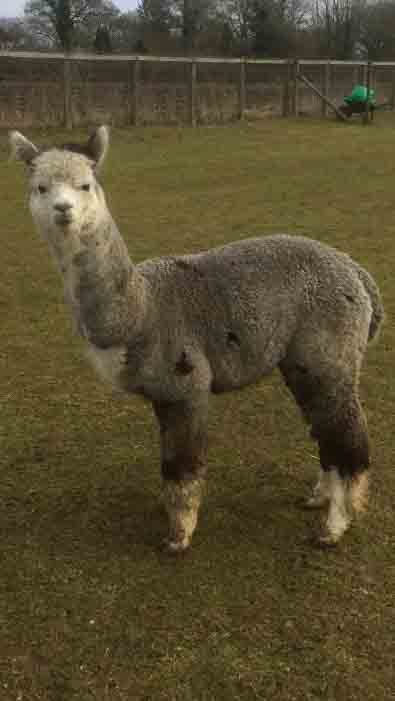 We added Full Metal Jacket (FMJ) to our huacaya stud male team in 2017. He is a stunning grey boy with excellent conformation, good bone, good bite and as with all Long John progeny NO blue in the eyes.

He is out of Cedar House Long John and Herts alpacas best black female Indigo Usha of ACC. She has good black lines, amazing coverage and also has had two grey cria previously.

FMJ has been shown twice - getting 4th at the BAS National in a very strong grey junior class and then got first intermediate male at the HoE Show.

FMJ is a classical grey with a silver grey fleece, his fleece is of mid density and has a good handle, he shows good uniformity of colour through the blanket which has good definition for a grey.

FMJ is not a typical grey in that he has a rose grey (brown) leg. What really attracted him to us was the softness of his fleece and the uniformity of micron at shoulder, midside and rump. We are expecting his first cria in 2018.

Discounts apply on multiple stud fees.
The first stud fee is at cost.
The second fee attracts a 10% discount.
For more than 2 matings, further discounts apply – please contact us for details

Owners of female alpacas can have their newborn crias and mothers on their own farm while the females are remated – by choosing our mobile stud services. Alpacas load easily once halter trained (into a trailer or purpose built van in our case!) and sit (cush) when travelling, making the process of getting your females remated relatively stress free.

All of our stud males are halter trained and used to travelling. Typically the male would need to visit approximately every two weeks – until the female is rejecting (spitting off). In our experience, the first mating is normally 70% successful.

We should point out that the loading pictures are of Charlie Brown who is not a stud male but had hoped to be! We now have a purpose built van with all creature comforts for travelling our stud male alpacas. 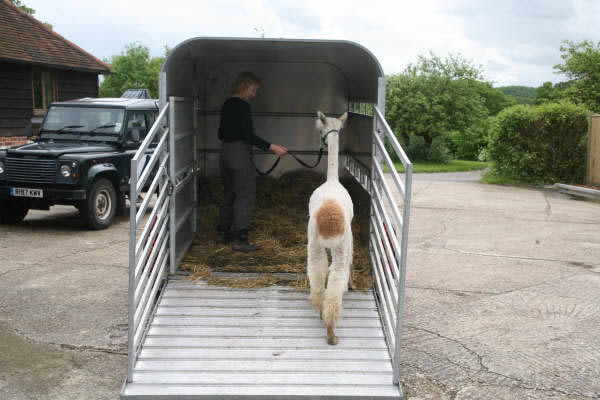 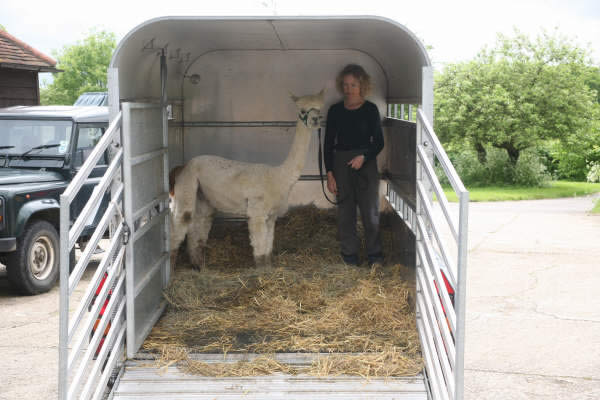 We guarantee a live cria on the ground for seven days or a free return to service (mileage not included).
The live cria guarantee will be honoured subject to a vet post mortem proving that the death was not as a result of negligence. It applies to the original purchaser and is not transferable.

The first visit with our males is free for a 50 mile distance from Spring Farm. For greater distances or return matings, a fee for mileage will be charges (currently £0.45 per mile).

If the female has sat three times following successful matings, it is the owner’s responsibility to speak to their vet for advice on the female’s status or offer a substitute female.

We will raise an invoice upon a scanned confirmed pregnancy. This scanning service is free – subject to being within 50 mile distance of Spring farm – otherwise a mileage fee will apply. Payment terms are strictly within 30 days.

Whilst we are not able to offer alpaca walks, we a

All Marg needs now is a woolly hat! #springfarmalp

You don’t need a thermometer when you have Reneg

Proof (if ever it was needed) that alpacas are rel

Wild flowers and fungi are still active even at th

Looks like New Year’s Eve will be fancy dress on

After a visit from Bella, the Mums and Babies are

We are going into Tier 4 of the Government’s Cov

Sansa must be a great story teller! #springfarmalp

Happy Christmas to all (especially Sienna) from ou