Filming with alpacas and llamas

Here at Spring Farm Alpacas, we have spent 20 years learning all the skills required to make our alpacas as chilled and friendly as possible. We set up our alpaca walking business 6 years ago and have been awarded the Trip Advisor Hall of Fame for our walking business. This was after being rewarded the Trip Advisor Certificate of Excellence for every year we have been walking alpacas. Vicki has also honed her handling skills to the extent that she has travelled Europe and the UK giving handling demonstrations for alpacas and llamas!

Every alpaca here is treated as an individual. We have been walking with alpacas and the public here for the last 6 years, all our alpacas (except Marg – feel free to ask) are beautifully halter trained. This means that working with us humans is not an issue for them. In fact, they positively thrive on our interactions.

We have been asked to appear on multiple TV shows and to supply alpacas for adverts. Our main issues with some requests are making sure our alpacas are not stressed and bio-security. As a result, we have turned down filming in Gatwick Airport for a well know airline for instance!

But, if you are looking for alpacas for a film shoot, advertising or any other media exposure, we will do our best to accommodate you.

Our alpacas and llamas on TV

We would just ask that you give us a bit of notice so we can plan! The day we appeared on The One Show, we were asked the night before! We took one llama (we have 7 at current count) and one alpaca (we have 110 currently) up to BBC TV Centre to meet Matt Baker, Angela Scanlon and Julia Bradbury to illustrate a feature on Britain’s Best Walks. 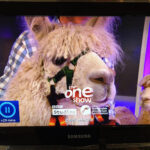 The One Show closing credits 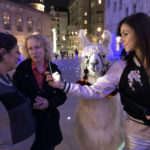 Julia Bradbury and Eron (The Llama) 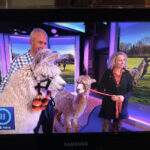 The One Show in the studio

When we were asked to go on ITV’s Good Morning Britain, we had a days notice but were unfortunately in South America when the call came through! We are able to travel our alpacas and llamas as we have a purpose built van with a transported licence for up to 8 hours. However, we would far rather you came here if possible! We have also appeared on the US Tennis channel with other projects in the pipeline. Don’t forget, we are a stones throw from London too!

In 2016, we hosted JB from CBBC’s Down on the Farm. It must have been the coldest day that Winter, but having the crew here at Spring Farm made life much easier (for us)! 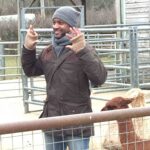 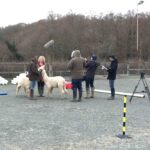 Filming in our alpaca agility course 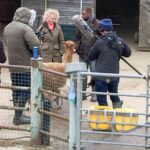 JB from Down on the Farm with Vicki and alpacas

Alpacas and llamas for advertising

Over the years we have featured with our amazing alpacas in advertising campaigns. These have been for model shoots, general advertising and even cartoons! Because our alpacas and llamas are so well behaved and used to interacting, they are completely chilled with the added publicity! 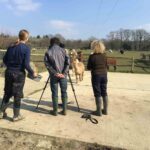 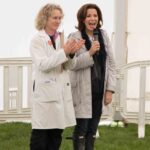 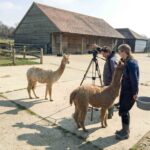 If you want to feature alpacas and llamas in whatever branch of media you are in, please contact us. We have 110 acres of wildflower meadows, ancient woodland and beautiful friendly alpacas as a backdrop. We are open to suggestions for filming with alpacas and llamas as long as their welfare is paramount.

Filming with alpacas and llamas Here at Spring Farm Alpacas, we have spent 20 … END_OF_DOCUMENT_TOKEN_TO_BE_REPLACED

After yesterdays Government announcement, we are going to reopen our alpaca … END_OF_DOCUMENT_TOKEN_TO_BE_REPLACED

We’re back in action with alpaca walking! 😃 #

No, not the result of the recent snowfall...these

Sapphire has hit the ground running! Not only seco

Welcoming committee for Sapphire - in a snowstorm

In preparation for reopening our alpaca walks, we

Thanks to The Observer on Sunday for featuring us

Alfonzo and Emma showing how it’s done on the se

Lou and Emma are hoping that Truffle and Yuri migh

Isaac and the walking boys team are a tad concerne

Azriel is going to the South of England Show in Ap

Some alpaca’s just look happy. This is Apache wh

And so it begins! Llama agility training with the

It’s tough being an alpaca when your best mates