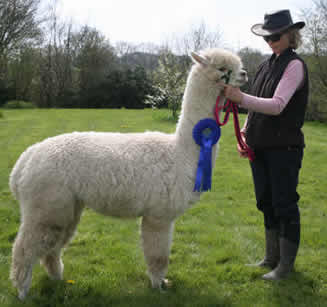 Are there more than one type?
There are two types of alpacas – Huacaya and Suri. Huacayas should have both a dense and crimped fleece which is fine and feels very soft to the touch. Suris fleece hangs from the body in narrow pencil locks (looks like dreadlocks). It should be fine, lustrous and have a silky handle – which feels cool to the touch.

How big are they?
Adult alpacas weigh about 70 to 85 kg and stand about 36'' tall at the withers.

Do they get many illnesses?
Alpacas are extremely hardy, but do need vaccinating and worming. Crias are generally vaccinated at one month old, and wormed at six months – when they are weaned.

What do they eat?
They graze and browse, and ideally need access to hay all year round. We give ours a feed supplement once a day which gives them a correct balance of minerals and vitamins.

How many alpacas can you keep per acre?
About 2 to 3 alpacas can be kept per acre depending on the quality of the grass and the time of the year. In certain circumstances a higher stocking density is possible, but obviously it helps to be able to rotate their grazing.

How long is their gestation?
Alpacas have a gestation of about 11.5 months. They give birth to a single cria which generally weighs about 6 to 9 kg. Alpaca crias tend to be born in daylight in the late morning, but are seldom born later than mid-afternoon. They very rarely have twins, but if they do they rarely both survive. Crias are typically weaned at about 6 months.

Are they difficult to breed?
The females are first bred at about 2 years old. They are induced ovulators and therefore can be bred at any time. However, we want the cria to be born in late Spring/early Summer so typically mating occurs between May and July. This is to avoid the colder months as female alpacas do not lick their cria dry. If crias are born during the colder months of the year, they can die of hypothermia. The females are generally re-mated 2 to 6 weeks after the birth. Males become fertile at about 2 to 3 years old.

Do they need special shelter or fencing?
Alpacas benefit from a field shelter to allow them to get out of the rain and the sun but they do not need to be brought in during bad weather and they do not need stabling. Alpacas do not challenge fences and so a 4 foot fence is adequate. Barbed wire should be avoided as should electric fencing.

Do they affect the pasture?
Alpacas are very gentle on the land because their toes have soft pads and therefore do not churn up the ground. They deposit their droppings in middens in only a few sites and therefore cleaning up is easy. Alpaca droppings make incredible fertiliser which doesn't need to be rotted down - you can pick it up and use straight away on your plants!

Can alpacas be kept on their own?
No, alpacas are a herd animal and can become very stressed if kept alone even for short periods (such as travelling). They should be kept in groups of three or more. Alpacas can be run with other animals such as goats and sheep. They are sometimes kept with horses, ponies and donkeys, but should be introduced with care.

Are alpacas easy to handle?
Alpacas are very gentle and easy to handle. They can be halter trained very easily especially when young. We are often asked "do alpacas spit?" Alpacas normally only spit at each other when arguing over personal space or food (or females if they are boys). Think of it as comparable to humans swearing - only occasionally and to emphasise a point. Occasionally, alpacas will kick when being touched on their back legs/end which is normally a response to a perceived predator. Alpacas have lower teeth at the front of the jaw which meet on a hard upper pad. At the back of the jaw, they have molars like us on both top and bottom jaws. In addition, they develop "fighting teeth" which are half way back in the jaw and are used by stud male alpacas for fighting. We round off these teeth in our stud males to prevent them injuring themselves - but this is a vet's job - please don't try this yourself. They don't tend to bite, but sometimes pull at clothing to attract attention!

How often do they need shearing?
We shear our alpacas once a year - both huacayas and suris. On average a fleece will weigh about 3 to 5kg with top quality stud males having fleece weights at the upper end or even above 5kg.

What colours can alpacas be?
There are 22 fleece colours ranging from white to fawns and browns to black, there are also greys and rose greys and multis.

Do alpacas make good pets?
Alpacas make excellent pets. They are intelligent, easily trained and are very gentle with children. They are inquisitive, approaching people who stand and watch them. They will eat out of the hand if time is spent with them, and training to lead by a halter is straightforward (we teach all our alpacas after they are weaned).

Last week we were delighted to host Lola and Ali from Marjan TV Network. Marjan … END_OF_DOCUMENT_TOKEN_TO_BE_REPLACED

We had a great day shearing yesterday…not sure M

Huge thank you to all our staff for a seamless she

We are about to start Meditating with alpacas agai

Spring Farm Alpacas team at the South of England S

Spring is such a great time on the farm. Our beaut

Our holiday let has great views of one of the birt

After every alpaca walk we take our walking guests

Class of 2021 getting all grown up now! #springfar

Every walk is a pleasure for us. Sometimes our gue

First time ever on the farm - a leucistic pheasant